We are in a blasted landscape of craggy outcroppings and leafless trees, lit by a ochre sky edging toward night. In this God-forsaken setting, a lone figure reclines on the dark, oily earth. Naked, with green-blue skin, and illuminated by an eerie light, this strange soul holds what appears to be a fragment of an animal’s skeleton.

This is the dramatic scene that Peter Granucci has conjured forth in Mourning the Loss, his recent series of paintings. The series is comprised of five groups which explore loss and grief, with an immediacy that is vivid and visceral. We are confronted by images that speak to us directly of suffering, contemplation, and the slender hope of redemption. The artists peaks eloquently in the language of the body: the torso that twists, the arms that embrace the self, the back bent low in surrender. Hands clasp in aguish, gesticulate against the sky, or tenderly cradle a poor creature’s remains.

It is left to the viewer to enter Granucci’s apocalyptic world and come to terms with the same tragic mystery with which the figures struggle. A key lies in the figures themselves. Solitary, naked, without hair, and strangely tinted, they have morphed into embodiments of loss. They are earless, seemingly in response to a world where nature has become silent. These mostly female figures, holding reminders of life extinguished, are archetypal in their monumental mourning. It is as if nature has fallen victim to a massive ecological catastrophe, that has rendered it toxic and withered, its species succumbing to extinction. The figures, simultaneously abject and nurturing, through their bodies give voice to nature’s cry.

Granucci has taken to heart the environmental warnings that threaten to become a global emergency and has rendered them in almost shockingly human terms. The painting Intimate Loss #6 shows a figure with its head hidden in its arms, sitting in the sharp ruins of a great tree that looms before a cloud-filled sky. In one hand the figure holds a heron’s skull. The image is both painful and somehow exalting. The human presence seems to imply an ongoing witness to the world. For all its fantastic grotesquery, the scene bespeaks an urgent moral consciousness.

Granucci’s paintings mourn not just endangered nature, but the human condition itself. Vulnerable and yet persisting, humanity is honored even in its darkest hour.

Peter Granucci is a figurative painter based in New Hampshire who paints powerful allegories of the human condition. His art courageously takes on the problem of existential meaning at a time when such exploration is often neglected, or even dismissed, by much of the contemporary art community; however, Granucci persists in his mission to describe people and nature at their most basic or primal. He sees our situation as metaphysically troubled–the implications of much of his art are pessimistic in that they offer few alternatives to the troubled, casually ravaged world in which we live. Yet, at the same time, there is a deep-seated commitment toward hope in the sense that Granucci paints feelings in their most elemental state–in an artist’s statement, the artist comments, “I hope to express deep raw emotions (passion, loss, struggle, despair, hope) that are from my (our) core being. I hope to show our universal common self, that part of us that we all share, so perhaps, we can experience more compassion for each other.” Granucci’s comment sheds light on his personal motivation, namely, to render the universalization of feeling within a figurative format, but it can also be said that the artist addresses the natural world–many of his figures hold small animal skeletons–and its tragic devastation in the contemporary era.

The titles of Granucci’s series–“Contemplation,” “All That Remains,” “Railing Against Our Nature,” and “Alone in the Grief”–give a sense of the artist’s seriousness of purpose and eloquent choice to portray tragic elements in our nature. In one work from “All That Remains,” a naked man crouches before us, with one knee up. His hairless head is bent down, and he holds a small animal skull; while his body is surrounded by light, the foreground and background elsewhere is a dark bluish green. It is a grim rendering of human life at its elemental, yet the painting contains hope as well; a warm red light glows in his torso, where his heart is found. In another image, from the series “Alone in the Grief,” we are given the back view of a naked woman crouching in what seems to be a blasted field; the way she is posed, we cannot see her head, only the strong curves of her body. In conversation, the artist has acknowledged our current ecological situation as “terribly sad,” and there is in this painting, and throughout the body of Granucci’s work, the suggestion of natural tragedy. A large part of the power in his art derives from his willingness to confront the immensity of natural destruction within an intimate format; the paintings speak allegorically to our condition, commenting on our troubles by representing them symbolically.

But, again, there is often, if not always, a promise of hope in Granucci’s paintings. The contemplative element in his art is by itself a positive activity, one from which action may be taken. Granucci doesn’t offer an answer to our strange, philosophically senseless destruction of nature; instead, he presents us with tableaus of meaning, in which the essential seriousness of the best of our selves is implicitly praised. In one painting, from the “Railing Against Our Nature” series, which is unusual because it is a portrait of a group, the artist enigmatically places four people, all of them nude and hairless, in a rocky domain. Two of the figures abjectly recline on the right of the painting, while in the center two (a man and a woman) sit, the man extending his arms into the darkly yellow-green background. His activity serves as an act seemingly negating the despair around him; despite the deeply pessimistic implications of the color and poses, someone is extending what might literally be called “a helping hand.” Granucci’s art is filled with a high moral purpose that helps him save his paintings against his own reading of our fate; he sees our common earth as nearly scorched yet finds meaning in the representation of figures that suggest possibility and even hope. In this sense, he is a visionary realist, not only in his style but also in his thinking. 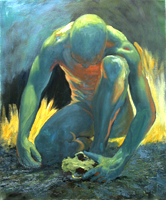 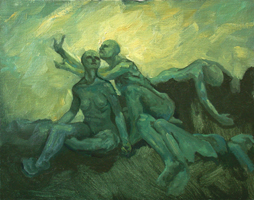 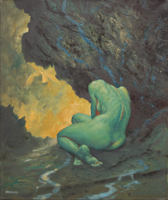 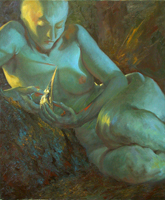